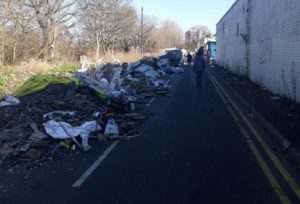 A road well known for attracting many a fly-tip has been hit once again.

A 50 tonne fly-tip in Redhouse Road, which borders Croydon, Merton, and Sutton, was finally cleared in early 2018 after being allowed to pile up for years.

Now a fresh load of rubbish has found its way into the privately owned road, a week after residents said a group of Travellers moved into Mitcham Common.

A spokesman for Sutton Council said: “Redhouse Road is a private road in Sutton on the boundary of the London Borough of Merton and Mitcham Common.

“The owner of the private road is the Driver Vehicle and Standards Agency DVSA.

“The site forms part of that also managed and regulated by the Mitcham Common Conservators.”

The council supported the previous clear up of the 50-tonne fly-tip but said any further action requires the support of the landowner, the Conservators and local businesses.

Send us an email